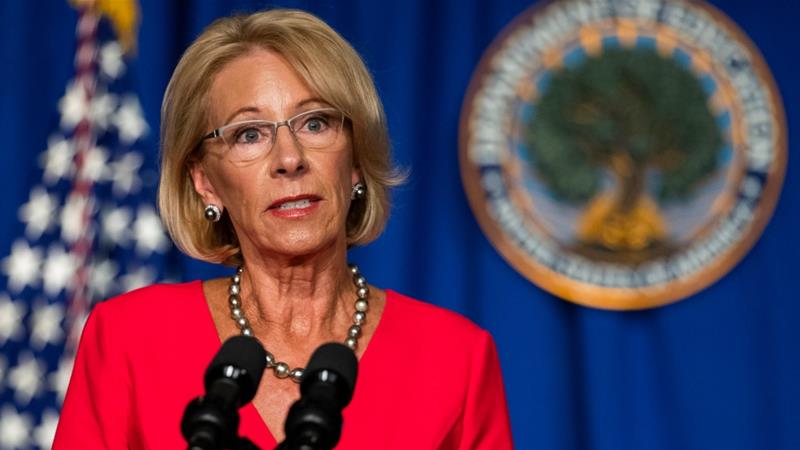 The Trump administration has continued to press on for full school reopenings in the fall (autumn), with Education Secretary Betsy Devos insisting such action is necessary, despite record surges of coronavirus infections in the country.

DeVos, in two television interviews on Sunday, insisted on the need for schools to reopen, even as several states were registering record numbers of coronavirus cases and hospitals in many cities were struggling to cope. Florida on Sunday reported a record in the highest daily spike of any US state since the pandemic began, with more than 15,000 infections.

“Families need for kids to get back in the classroom. And it can be done safely.”

The statement came even as a Trump administration health official warned that “everything should be on the table” as deaths in the US were continuing  to rise. To date, the country has recorded at least 3.1 million cases and 135,000 deaths.

“We’re all very concerned,” Admiral Brett Giroir, the assistant secretary of health, told ABC’s This Week programme, as he called for the reclosing of bars, greater spacing in restaurants and the near-universal wearing of masks in the areas most afflicted, largely in southern states that reopened aggressively.

The pressure to reopen schools has come from the top, with President Donald Trump threatening to withhold federal funding from schools that refuse to reopen – a stance that DeVos reconfirmed on Sunday.

Trump has criticised guidelines from the federal Centers for Disease Control (CDC) for the safe reopening of schools, saying they were too rigid and too expensive.

But many school systems say the safety of millions of students, teachers and staff can be ensured only with some combination of remote and in-person schooling – or in some cases remote-only teaching – and that a fully in-person approach, to be safe, would impose extreme costs.

When pressed on whether the government would withhold federal funds from schools, which generally account for about 10 percent of local school budgets, a substantial contribution at a time when reopening costs for larger school systems can run to the millions, DeVos demurred.

“There is no desire to take money away,” she said on CNN. “In fact, we want to see schools open and have been committed to ensuring the resources are there to do that.”

‘Malfeasance and dereliction of duty’

DeVos’s comments stood in stark contrast with those of House of Representatives Speaker Nancy Pelosi, who accused Trump of “messing with” children’s health and called for the CDC’s guidelines for school reopenings to be mandatory.

“Going back to school presents the biggest risk for the spread of the coronavirus,” Pelosi said on CNN’s State of the Union programme. “If there are CDC guidelines, they should be requirements …They should be mandates.”

Responding directly to DeVos’s comments, Pelosi said: “What we heard from the secretary was malfeasance and dereliction of duty.”